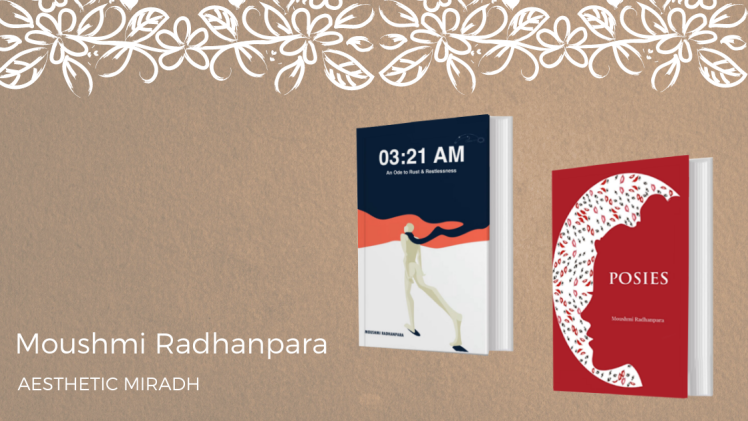 Normal outside and a little complicated inside, Moushmi Radhanpara holds a Ph.D. in overthinking but with a master’s in English Literature, dreams of having a real doctorate someday. An ardent believer of femininity and feminism, she also openly talks about mental health. She prefers to live in a fantasy world, finding refuge in a mirage of words- reading and writing. She gets her articles published in newspapers when she is disturbed by what is going on around her or is acutely haunted by humans.

POSIES, a collection of poetries is her debut book, where the writer touches upon myriad colors of life from celebrating womanhood, finding meaning in a world full of meaninglessness, accepting the self, to drowning in the glory of love, wallowing in emotions and the state of depression, and even reveling in the matters of life and death. A modern-day writer bringing you face-to-face with the dilemmas of our modern world, she will leave you questioning with her mundane musings and inquisitive inklings. She considers this as a small contribution to the literary world, a soulful world which has given her so much in return.

03:21 AM: An Ode to Rust & Restlessness, is her second book, a collection of poetry trying to bring out these obscure feelings of someone who has no clue how to explain what they are going through, an appeal to make mental health issues just as easily acceptable. The book hopes that someone out there finds solace from the confusing conundrum of the verses and that it further gives a vivid picture of their torments and anguish to their loved ones. She believes that together, we can acknowledge, accept, and overcome. Her poetries have been published at various online literary magazines and she has also been a contributing writer for two anthology collections namely, ‘Mirage’and ‘The Lockdown Stories’.

She also has an exciting surprise coming up soon for those who categorize themselves under the ‘F’ word. Relax, we are talking about the feminists out there. She writes and blogs under the name Aesthetic Miradh and in what little time is left after the myriad other redundant humdrums of life, reviews books just for the sake of being called a professional reader.  For updates about the other foolish fumblings of her life and works head over to the writing section of the page titled ‘Pen Pushing On’.