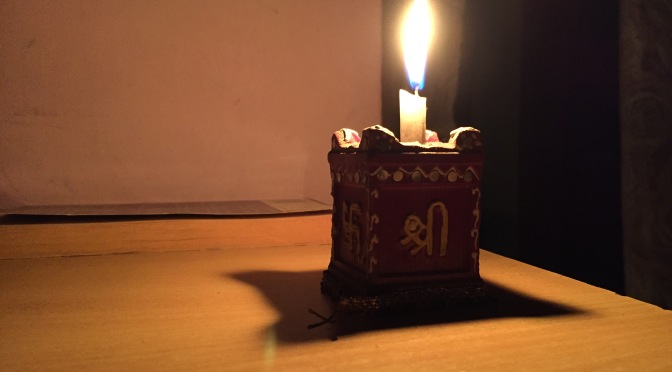 She was sitting there, lost into her gloomy thoughts. The room was awfully murky, and the darkness helped her hide from the light. Tattered as she was, so were her thoughts. Her appearance was no less depressed with rugged hair, with the black dress, and with face as dull as her feelings. She clutched onto herself, at a shuffle of sound, dreading anyone’s presence. She needed no one at the moment, she knew the amount of pessimism people brought to her, and she was also conscious of her own tumultuous state. It was all plentiful.

Lying down, she shut her eyes, as if the room was not dark enough. Taking deep breathes she suddenly felt the loss of air, the need for cool air. And there it was, a sway of cool breeze through the window which had been kept open in the dark of the night.

Only then with the flicker of the light did she realise that there was a candle far away in the room, barely alight. The wind blowing now was making it harder for it to be kept lighted and she did not even wish it to be lighted. But no amount of wind could blow off the candle. It almost got burnt out and then just when it seemed that it was out, she would find that it was still alight, barely alight, but yes it did have the vigour and the desire to keep itself lighted which she knew she missed in herself.

A small candle which did not even have the needed amount of wax to light itself fought for the light that it wanted to spread in the darkness of the room, and there she was crouched at the far corner, hardly breathing, hardly wanting to live.

If the candle could put up a fight, so could she. She would reignite herself again; she would rise up and not let any sort of obscurity win over her. Not this time. She would keep her life lighted from then on. And there just when the candle burnt itself again and gave the brightest light, she knew she was born again.

And as the candle went off, she smiled brightly, welcoming the dawn, her tears long dried and a face that had the power to conquer her world. Her soul set free from the chains of the darkness.

Walking down the beach,

cool air blowing away my hair,

the warm sun smiling at my face,

how else could things be beautiful? 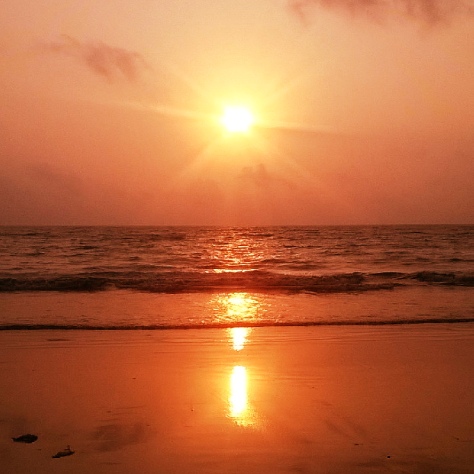 Cogito Ergo Sum. ["I think Therefore I am"]

A woman questioning almost everything, trying to find answers through her's and your words. I am on an unending quest, walking the paths of unknown. I am walking and walking, may be too slow, but I am doing it. I am happy as long as I am not stopping. I will be content to fall, to fly, to swim, to drown, only never to stop.

Write to me at:

If you want to get in touch with me you can write to me at aestheticmiradh@gmail.com or connect to me on twitter, my username is moushmi_

Unauthorized use and/or duplication of this material without express and written permission from this site’s author and/or owner is strictly prohibited. Excerpts and links may be used, provided that full and clear credit is given to Moushmi Radhanpara and  aestheticmiradh.com with appropriate and specific direction to the original content.

My All Time Love